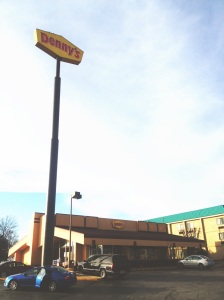 Four years ago our church challenged everyone to take or give one less gift at Christmas and instead donate the money to someone in need. That’s when a new family Christmas tradition began. We were headed to California and got stranded in a snow storm in Flagstaff, Arizona. The only place that was open was Denny’s. And that’s where the tradition was born. You can read about that first Christmas at Denny’s by clicking here.

Now, every Christmas each family member agrees to receive one less gift ($25) and instead give the money to an unsuspecting waiter or waitress at Denny’s. This year we stopped at the Denny’s in Joplin. That’s where we met Ronnie.

Ronnie is in her 50’s and single. She was the only waitress in the entire place and she was obviously worn out. She told us she had been working non-stop and was exhausted. Ronnie was unable to celebrate Christmas with her son because she was working. Not only that, she didn’t even put up a tree this year. Ronnie can only work part-time because of back problems. She was incredibly humble and said she was just happy to celebrate Christmas with her cat and dog.

At the end of the meal Ronnie gave us our ticket and we went to the front to pay. Because she was the only waitress in the place we had to pay her at the register. I handed her the ticket and $180 in cash and told her “keep the change.” She paused for a moment, looked down at the ticket, then looked up at me, as tears filled her eyes. She was barely able to talk as she came around the register and hugged each of us…twice!

The truth is, we all about lost it when Ronnie hugged us. We drove away, said a prayer for Ronnie, and relished in the best gift we had all gotten for Christmas. That’s when we learned the true meaning behind the words of Jesus in Acts 20:35. “It is better to give than to receive.”